Recently I’ve had lots of questions about how to create multi-module projects, so when I discovered this technique, I thought I’d write this up. This technique exploits a little known feature of the archetype:create plugin, and the Maven site archetype to kickstart your project. Creating a multi-module project has many benefits, one of them being the ability to build every artifact in a project with one simple mvn compile command. Another benefit is that if you are using either the maven eclipse:eclipse plugin or the idea:idea plugin, you can enter this command at the root of the project and it will generate all of the project files for all of the contained modules.

this will generate a Maven project with the following directory structure.

The project that is generated is the minimum project setup to generate site documentation. The index.apt file is the main index page for the site, and is written in the Almost Plain Text format, which is a wiki like format. You can also generate a more complete site project using the maven-archetype-site archetype like this,

This will generate the following project structure. 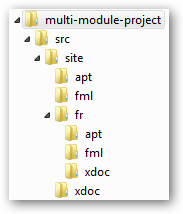 After you have generated the site project, edit the pom.xml created from the site archetype plugin. Make sure the the packaging type is set to pom like the following.

By setting the packaging type to pom, any projects you generate from the root of the project directory will insert itself into the project by creating an entry into the modules section of the pom.xml for the site. In the root directory of your project that you created above, type in the following command,

If you now edit the pom.xml for the main project, you should see an entry towards the bottom of the file like the following.